Welsh Fire set for action-packed second year of The Hundred 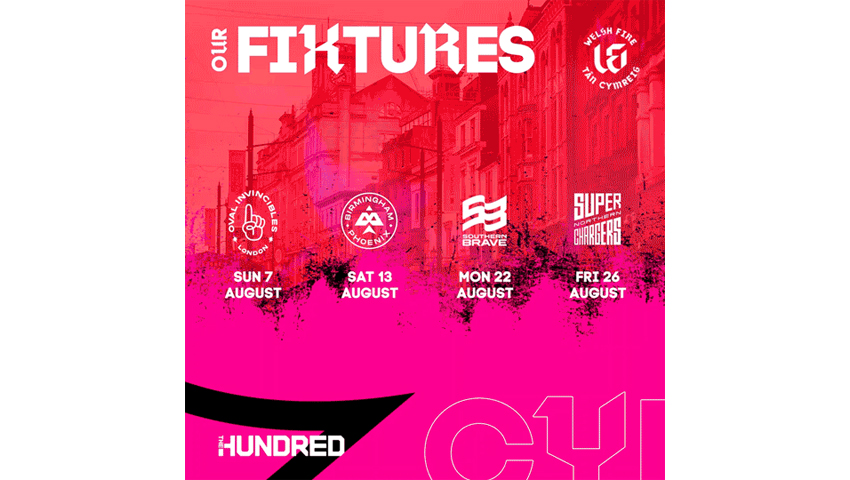 Welsh Fire and Southern Brave kick off the men’s competition in Southampton on Wednesday 3 August. Men then play at Sophia Gardens on Sunday 7 August

Women’s competition starts Thursday 11 August at The Kia Oval after the Birmingham 2022 Commonwealth Games, with Fire women first in action on Saturday 13 August at home to Birmingham Phoenix

Welsh Fire men’s and women’s teams are back in action this summer as cricket’s newest competition returns to thrill crowds with more fast-paced cricket and action-packed entertainment for all ages.

Welsh Fire men’s team take on reigning champions Southern Brave in the competition’s curtain-raiser at the Ageas Bowl on Wednesday 3 August at 19:00. They then host Oval Invincibles in their first game at Sophie Gardens on Sunday 7 August.

Due to the inclusion of women’s cricket in the Commonwealth Games programme, The Hundred women’s competition will start a few days after the men’s this year. However, once the women’s competition starts on 11 August the fixtures will revert to the popular double-header format, with both men’s and women’s teams playing on the same day – with tickets entitling fans to watch both games.

Welsh Fire’s women will first be in action in the double header will be at home against Birmingham Phoenix on Saturday 13 August.

Stadiums were packed out last year as crowds enjoyed world-class cricket alongside entertainment from top music acts including Jax Jones and Becky Hill as well as. The Hundred’s ongoing partnership with BBC Music Introducing guarantees another year of top tier live music and performances throughout the competition.

The Hundred will begin this year with defending men’s champions Southern Brave taking on Welsh Fire at the Ageas Bowl on Wednesday 3 August. Inaugural women’s winners Oval Invincibles will host Northern Superchargers in the first men’s and women’s double header on Thursday 11 August. Group stages will end on Wednesday 31 August before the second and third placed teams face each other at the Ageas Bowl in The Hundred Eliminator on Friday 2 September. The winners will face the top ranked team in The Hundred Final on Saturday 3 September at Lord’s.

Jake Ball, Welsh Fire’s 2021 fast bowler, said: “The Hundred was fantastic last year, it was a truly special thing to be a part of. The cricket, the music, the fireworks – it was a great atmosphere! Bring on August 3 against the reigning champions at the Ageas Bowl!”

Tickets will remain unbelievable value for families with prices set at £5 for under 16s and free for children aged five and under. There will be even more activities around the ground to entertain families alongside the world class cricket on the pitch.  And ticket buyers will be able to choose their own seats this year with family-friendly zones in every venue.

Tickets will remain unbelievable value for families with prices set at £5 for under 16s and free for children aged five and under. There will be even more activities around the ground to entertain families alongside the world class cricket on the pitch.  And ticket buyers will be able to choose their own seats this year with family-friendly zones in every venue.

Fans will be able to get their hands on tickets in two priority windows, firstly for 2021 tickets holders, attendees and members in late February and a second window on 31 March for anyone who has signed up via thehundred.com. Tickets will then go on general sale on 20 April.

Games will once again be broadcast live on Sky Sports and BBC throughout the competition after more than 16m tuned in to watch The Hundred on TV alone in 2021.

Tickets will go on general sale on Wednesday 20 April on thehundred.com. For 2021 tickets holders, attendees and members, tickets will be available in late February. A second window will open on Thursday 31 March for anyone who has signed up at thehundred.com for priority ticket access to this year’s event.

Sanjay Patel, Managing Director for The Hundred said, “The Hundred helped grow the game last year. With more than 500,000 tickets sold and issued and 16 million watching on TV – with half of them being new to cricket – we saw a new audience enjoying the game for the first time. We can’t wait to build on that this year, bringing world class cricket and an incredible family day out to fans across England and Wales.”

The first year of The Hundred saw 510,000 tickets sold and issued as the competition welcomed new and existing fans. Grounds across the country posted sell-outs and 19% of all tickets sold were for under 16s. 55% of ticket buyers for The Hundred hadn’t bought a ticket for cricket in this country before while attendances across the competition were the highest for a women’s cricket event globally ever.