Cardiff will host this year’s BBC Radio 6 Music Festival, which will take place from Friday 1 – Sunday 3 April. The line-up was announced this morning on 6 Music by Huw Stephens and Mary Anne Hobbs. 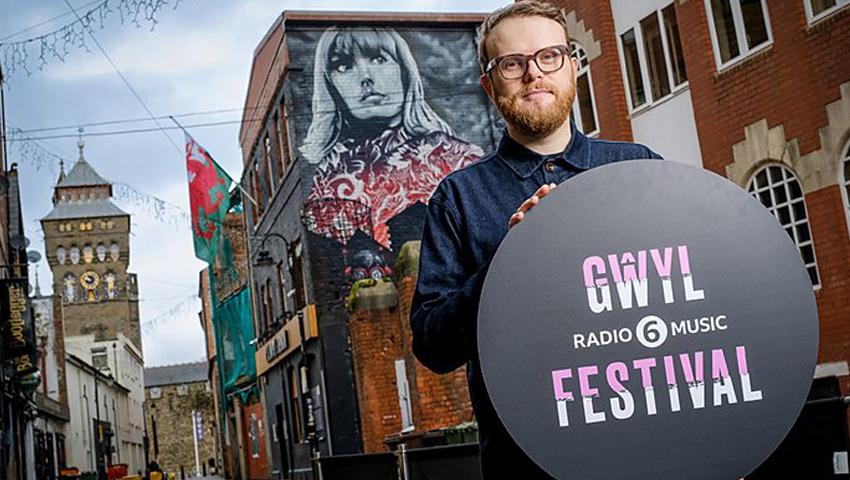 “It’s great news that the 6 Music Festival is coming to Cardiff. We love our live music here; gigs and club nights are a massive part of what makes Cardiff special, and live music is in our blood. We also love BBC Radio 6 Music and to have this incredible festival happening here at this important time in live music venues’ recovery, is really exciting.”  – Huw Stephens

The festival will see live performances, DJ sets, In Conversations and more across multiple venues in Wales’ capital city, including St David’s Hall, The Great Hall and Y Plas in Cardiff University Students’ Union and Tramshed.

Samantha Moy, Head of BBC Radio 6 Music, says: “After two years, it feels very special to say that the 6 Music Festival is back with a bang in Cardiff. This is a city which has always had a thriving music scene and I can’t wait to bring the 6 Music family, of both presenters and listeners, together for the magic of the 6 Music Festival.”

Mary Anne Hobbs says: “The most exciting element about the 6 Music Festival is the coming together, in a physical space, of our beloved 6 Music listeners and the staff at the station, with artists we love. Lockdowns have kept us apart since 2020, so this year’s gigs in Cardiff are going to feel super-charged.”

Huw Stephens says: “It’s great news that the 6 Music Festival is coming to Cardiff. We love our live music here; gigs and club nights are a massive part of what makes Cardiff special, and live music is in our blood. We also love BBC Radio 6 Music and to have this incredible festival happening here at this important time in live music venues’ recovery, is really exciting.”

Leader of Cardiff Council and Chair of the Cardiff Music Board, Cllr Huw Thomas, said: “We are thrilled to welcome the BBC 6 Music Festival to Cardiff this spring. 6 Music is simply the best alternative music station in the world. It champions live music, new artists and an alternative spirit in popular music, a spirit and an energy that has made British music famous around the globe. Here in Cardiff there’s a real pride in the independent music scene which the city offers and through our Cardiff Music City strategy we have plans to grow and harness that energy. We’ve worked with the BBC to help bring the festival to Wales for the first time and we know it will shine a well-deserved spotlight on what Cardiff has to offer. This is a great opportunity for the city and we can’t wait for it to start and to see more people getting out to enjoy live music again.”

There will be events in the day as well as at night. 6 Music Festival By Day events will take place at Tramshed and By Night events at St David’s Hall, The Great Hall and Y Plas. Tramshed will also host 6 Music Late, a club night featuring 6 Music DJs and special guests, which follows the 6 Music By Night live gigs.

Tickets for each separately ticketed event will be available from 10am on Thursday 17 February at bbc.co.uk/6musicfestival.

6 Music presenters including AFRODEUTSCHE, Amy Lamé, Cerys Matthews, Chris Hawkins, Craig Charles, Don Letts, Gideon Coe, Gilles Peterson, Huey Morgan, Jamz Supernova, Lauren Laverne, Mark Radcliffe, Mary Anne Hobbs, Nemone, Steve Lamacq, Stuart Maconie and Tom Ravenscroft will be broadcasting from Cardiff over the course of the weekend. They’ll be bringing live music, interviews, DJ sets and more from the festival to listeners, wherever they are across the UK. A programme presented by Huw Stephens (Sunday 3rd April, 4-7pm) will be simulcast on BBC Radio Wales. There will also be special editions of 6 Music’s Indie Forever (Saturday 2nd April, 3-4am), Ambient Focus (Saturday 2nd April, 4-6am) and Lose Yourself With… (Sunday 3rd April, 3-5am), curated by Welsh artists. All programmes will be available on BBC Sounds after broadcast.

BBC Radio Wales will also broadcast highlights and a number of the events live, and will re-broadcast Cerys Matthews’ 6 Music Festival programme on the evening of Sunday 3 April.

BBC Four and BBC Wales will revisit some of the best moments from the festival with a special programme, featuring performance highlights, to be aired at a later date.

Highlights from the festival will be available to watch on BBC iPlayer over the course of the weekend, and for 30 days afterwards.

BBC Music Introducing, in partnership with Horizons / Gorwelion, will be warming up for the festival with a special gig at Clwb Ifor Bach on Wednesday 30th March. Hosted by 6 Music’s Tom Robinson and BBC Radio Wales’ Bethan Elfyn, the show will see performances from Welsh artists and BBC Music Introducing favourites including Panic Shack, Adwaith, Malan and Hemes. Horizons / Gorwelion is a scheme delivered by BBC Cymru Wales in partnership with Arts Council Wales to develop new, independent contemporary music in Wales.

Alongside the 6 Music Festival, Creative Wales – an internal Welsh Government agency that promotes the creative sectors in Wales – is working with local venues and music partners to create the 6 Music Festival Fringe, showcasing exactly why Cardiff was named the UK’s first ‘Music City’ in 2021. The Festival Fringe will run from 28th March until 3rd April and feature artists and bands performing at venues across the city. These shows will fully showcase the breadth of talent and diversity of artists in Cardiff while shining a light on the vital role of grassroots music venues across the city.

Gerwyn Evans, Deputy Director of Creative Wales, said: “It is hugely exciting to welcome the BBC 6 Music Festival to Cardiff, and to have the opportunity to create a Fringe Festival hosted at grassroots music venues across the city. There are many events planned: jazz performances at Royal Welsh College of Music and Drama; rock gigs at Fuel, hip-hop at Porter’s and much more. In addition, Creative Wales has partnered with Cardiff Council, Creative Cardiff and the University of South Wales to create a series of daytime events and access for journalism students to experience the festival, write about it in their own words and have their work published. After what has been such a challenging couple of years for the music scene in the capital, it will be a joy to see everyone visiting to enjoy this special celebration.”

The 6 Music Festival is part of BBC 100 – an extraordinary year of special content, events and ambitious education initiatives to inform, educate and entertain the nation, marking 100 years of the BBC in 2022.

Further information is available at bbc.co.uk/6musicfestival.