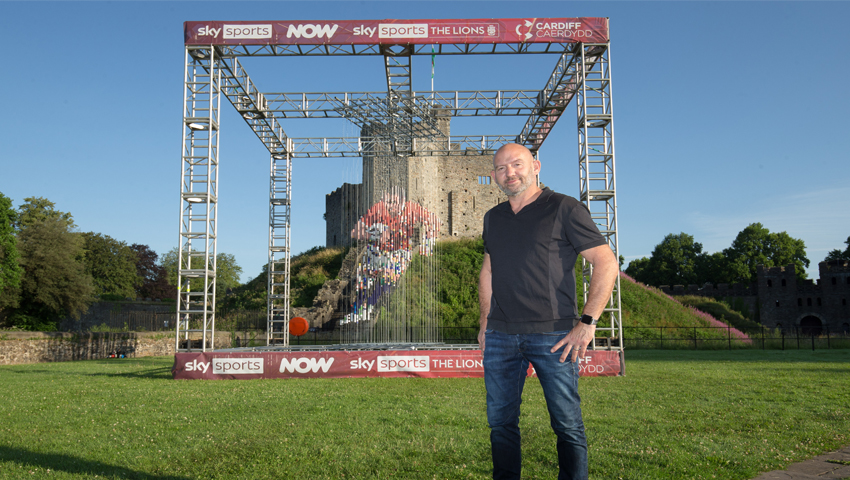 To help build excitement ahead of the opening Test match of the British & Irish Lions 2021 Castle Lager Series kicking off, Sky Sports and streaming service NOW have commissioned an artistic tribute for fans back home in the UK.

Taking over Cardiff Castle, the installation is inspired by the historic Rugby tour that captivates British and Irish fans every four years. Fans and members of the public in the Welsh capital will be able to savour the atmosphere and share their passion in the absence of touring supporters in stadiums.

Being erected in the city’s iconic 2,000-year-old castle grounds, the ‘perceptual’ art-piece takes on two different forms, dependent on the standpoint from which it is seen – meaning the viewer must move around the installation to witness its form blur into an indistinctive haze, before it refocuses into an entirely new shape.

From one angle, the art will show an action-packed Lions player sprinting with ball in hand towards the try-line; from another, it will depict the head of a roaring lion.

The artwork, known as “The Lion”, is 7m x 7m in size, and comprises 300 pipes suspended from a frame and wrapped with 180 metres of coloured vinyl prints, with each colour representing the four nations that combine to create the British and Irish Lions.

Sky Sports and NOW are collaborating with Perceptual Artist Michael Murphy to create the artwork, described as “illusions of images rendered in three-dimensional space” to represent the passion of the famous Lions fans, known as the “Sea of Red”, who for the 2021 tour are unable to roar on the squad in South Africa.

Lions fans will be able to visit Cardiff Castle to see “The Lion” in place from the 14th-19th July, where it will be in place against the stunning backdrop of the castle walls through the weekend, as the Lions take on South Africa in the opening Test match of the tour.

Sky Sports Rugby Union Senior Producer James Lewis said: “With fans unable to travel to cheer on the Lions in stadia in South Africa, we wanted to do something back at home to build excitement ahead of the Test matches getting underway, when fans will roaring on the squad from their living rooms.”

Artist Michael Murphy added: “I’m really excited to unveil this artwork – which I have named simply “The Lion” to celebrate The British & Irish Lions tour of South Africa is what I call a “multi-directional illusion sculpture” – a halftone image rendered in three-dimensional space. As viewers approach the sculpture, an illusion of a rugby player will start to emerge, which, as they walk ninety degrees around the artwork, will transform into an illusion of a roaring Lion’s head.”

Cardiff Council Cabinet Member for Culture and Leisure, Cllr Peter Bradbury said: “This is a fitting tribute to the British and Irish Lions team, placed in the historic setting of Cardiff Castle, and a stone’s throw from the Principality Stadium, one of the most iconic venues in world rugby. There will be many disappointed fans in Wales at the moment, after they were all set to head to South Africa to cheer on the team from the stands, but this artwork is a symbol of the great support the Lions will still be getting from back home.”

Fans of the British and Irish Lions will be able to watch the three Test matches of the tour on the dedicated Sky Sports The Lions pop-up channel or stream Sky Sports with a NOW Sports Membership, as well as having access to a host of additional Lions content including documentaries, archive games and behind the scenes content.

The Lions Tour of South Africa adds to an already busy line-up of sport on Sky Sports this summer. Cricket’s newest format, The Hundred gets underway on 21st July, while England welcome Sri Lanka, Pakistan and India for international cricket this summer. Golf sees The Open take place at Royal St. George’s from 15th July. As well as that, Sky Sports is the home of domestic football with the Premier League, EFL and Scottish Premiership being joined for the first time by the FA Women’s Super League. On top of that, Anthony Joshua is scheduled to face Alexandr Usyk in September live on Sky Sports Box Office and much, much more!