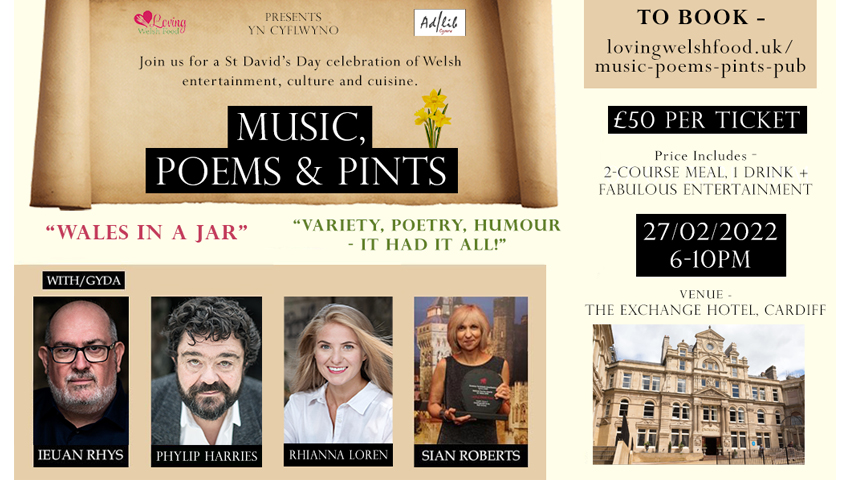 Award-winning Cardiff-based company, Loving Welsh Food is delighted to announce a new home and delicious new menu for Music, Poems & Pints in 2022. From 27 February this year, this fabulous light-hearted evening of Welsh entertainment and celebration of Welsh culture and cuisine will be hosted at Culley’s Kitchen & Bar in the historic, Coal Exchange Hotel. Guests will enjoy a delicious 2-course Welsh meal and local drink, followed by a fabulous evening of all things Welsh.

EAT: We start with a melt in your mouth Welsh Lamb casserole or Glamorgan cake seasonal vegetables. Welsh Lamb is bred by generations of families on the abundant grasslands of Wales and is known for its sweet and melting texture.

SMILE:  Well-known Welsh songs such as Men of Harlech and Ar Hyd y Nôs (All Through the Night) will bring a smile to guests’ faces, as will the poems of Max Boyce, Harri Webb and Roald Dahl. Our limerick competition is also great fun and always very popular – with a fabulous prize for the lucky winner!

The venue – The Coal Exchange is one of the most beautiful and historic buildings in Cardiff, the restaurant still bears many of the Coal Exchange’s original features. The wine cellar is housed within the lift that was once used to transport cash to and from the underground bank vaults.

Richard Palethorpe Culley was a well-known and respected Welsh philanthropist and entrepreneur who secured a catering contract with the Coal Exchange restaurant.  Today the restaurant pays homage to its founder, the Welsh coal miners’ story and the history of the Coal Exchange, where the price of the world’s coal was set and where the first £1M cheque was signed.

The perfect gift – “Music, Poems & Pints” is a perfect gift for Welsh friends and family, or anyone who loves all things Welsh.  A chance to celebrate in a fun and Welsh way!

“I loved it – I won the limerick competition!  The singing was lovely, there was a good combination of spoken, sung and very funny. I adore Under Milk Wood” Jennifer, Edinburgh.

Host – Ieuan Rhys (Actor/MC), Doctor Who, Pobol y Cwm, Da Vinci’s Demons, on TV and the big screen. His stage work includes Alan Bennett’s “People” for the National Theatre, many a musical including My Fair Lady, Oliver and over twenty pantomimes. Ieuan is a regular host at the Welsh Banquets at Cardiff Castle.  He also works as a Loving Welsh Food guide – enjoying a job where he is paid to eat!

Sian Roberts – (Loving Welsh Food Owner, Tour Guide, Presenter and Announcer (BBC, S4C).  Sian is the owner of Loving Welsh Food and has travelled all over the world promoting Welsh food and drink. Loving Welsh Food offers food tours, cookery workshops and demonstrations.  Sian has worked in the media for over 20 years as a freelance Television Director/Producer and News Reader / Continuity Announcer.

Phyl Harries (Actor/Musician) has worked in theatre, TV and film. Theatre has seen him show his “Bottom” in Shakespeare, as well as performing in “Cyrano”, “Tom – the Musical” and “One man Two Guvnors” . Together Mags and Phyl run the Welsh Banquets at Cardiff Castle and have entertained thousands of happy visitors over the years from all over the globe.

Rhianna Loren.  Pobol y Cwm fans will recognise Rhianna as “Luned” in the hugely popular Welsh language soap opera.  Since graduating at the University of South Wales with a BA in Theatre and Drama in 2015, Rhianna has worked for various theatre companies, played the character Esyllt Ethni Jones in a comedy series for S4C’s HANSH and was the villain in the Shane Williams Christmas panto.   Other TV credits include working as a voice over artist for Netflix.

Mabli Gwynne is an actress and singer-songwriter from Cardiff. She is a recent graduate of Mountview – one of the world’s leading drama schools based in London. Mabli’s love for performing began when she started competing at the Eisteddfod as a 6 year old. On her 10th birthday, she received a pink electric guitar and since then has been composing her own songs non-stop. In 2019, Mabli released her first Welsh album ‘Fi yw Fi’ and is currently working on an English one. Her hobbies include cooking, going to the theatre and watching films.

Gareth Nash. Born in Ferndale, Rhondda Fach, Gareth has enjoyed a successful career in Theatre and TV including 800 performances as Joly in the West End production of Les Miserables, the role of Harry in an off-West End production of State Fair, and the role of Malcolm in The Full Monty at The New Players Theatre, Charing Cross. Gareth’s Television credits include ‘Alys’, Tîm Talent’, ‘Welsh In The West End’, ‘Pobol y Cwm’, ‘Y Streic a Fi’, ‘Parch’, and ‘Panto Shane a’r Bont Hyd’.

Sian has produced a range of Welsh cooking DVDs, “Coginio” (cooking in Welsh), and has worked for a number of years promoting Welsh food and drink.  Sian speaks Welsh and English, French, Italian, a little German and has a smattering of Japanese.

Sian began her career as a Tour Leader in Europe, and Loving Welsh Food is now combining her experiences in tourism, the media and Welsh food promotion.   Sian also works as an Announcer for BBC Radio Wales and S4C.