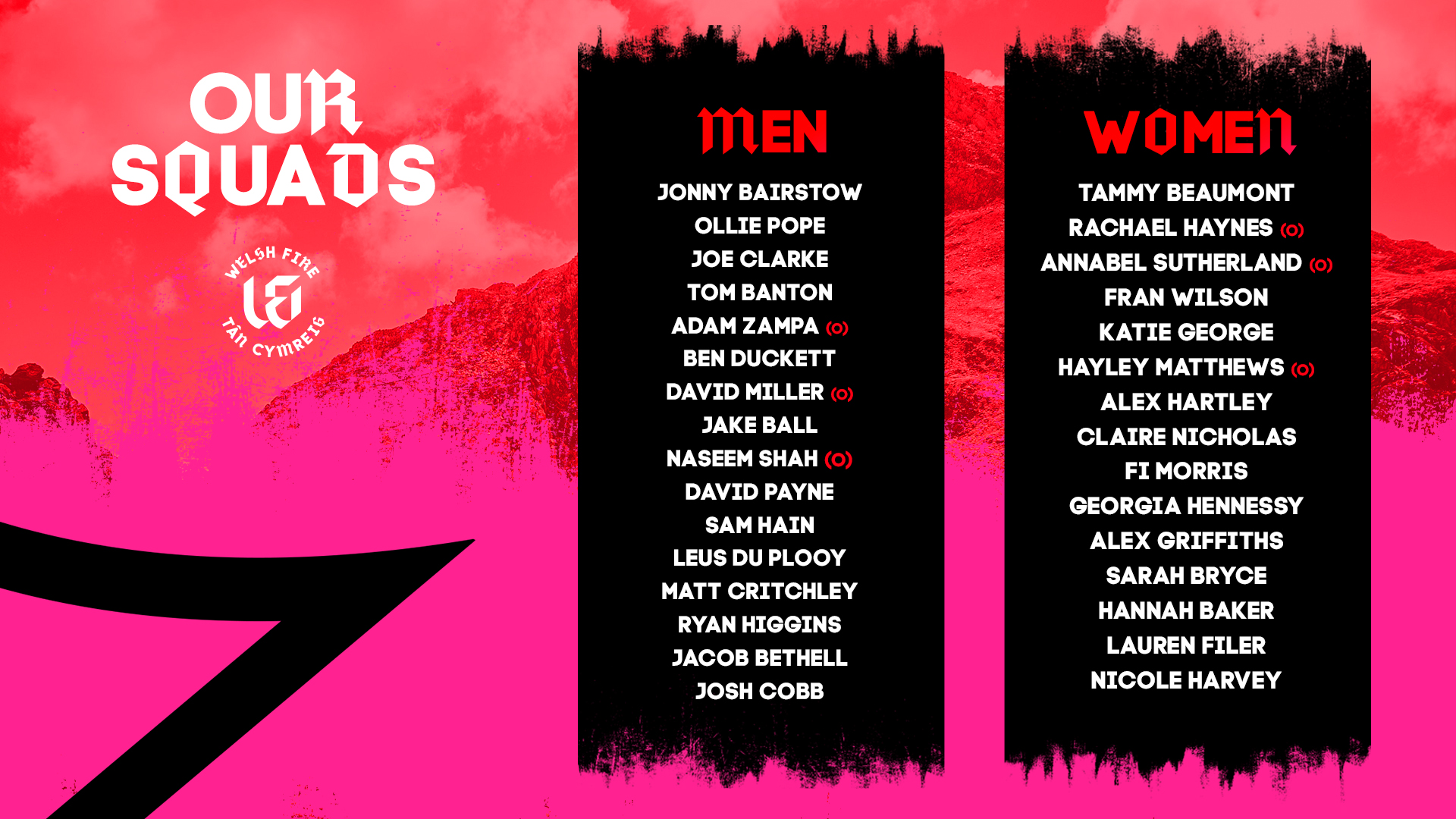 Joe Clarke, Tom Banton and Adam Zampa picked up for the men’s team

Sign up to thehundred.com to grab your seats today!

Welsh Fire snapped up star batter Joe Clarke as their first choice in The Hundred Draft.

The men’s side have also captured the signatures of three overseas stars in this year’s Draft, securing Australia spinner Adam Zampa, South African big-hitter David Miller, and Pakistan’s howler Naseem Shah. A strong looking domestic line up will be further bolstered by the re-signing of England and Somerset batter Tom Banton as the side looks to build on their first campaign.

Men’s team Head Coach Gary Kirsten has also drafted Sam Hain and Jacob Bethell, one of the stars as England reached the final of the ICC Under 19 World Cup earlier this year.

In the women’s team, England batter Tammy Beaumont has joined Welsh Fire in a sensational switch from London Spirit, and will now captain the side.

She will be joined by Australia’s Rachael Haynes and Annabel Sutherland, fresh from winning the ICC Women’s World Cup this weekend, who will appear alongside West Indies’ Hayley Matthews as the sides overseas players. Haynes had an incredible World Cup finishing as the second-highest run scorer in the history of the women’s competition.

They will join England batters Jonny Bairstow and Ollie Pope in Cardiff after they were both retained by Welsh Fire earlier this year, as well as captain Ben Duckett who finished as The Hundred’s second-highest run-scorer last season.

Tickets for The Hundred go on sale today to anyone signed up at thehundred.com. Anyone who hasn’t yet signed up can still do so and get immediate access.

Tammy Beaumont new Welsh Fire women’s captain said, said, “I’m beyond excited to be leading Welsh Fire this summer. I loved my time with London Spirit but the opportunity to captain Welsh Fire was something I couldn’t turn down. To have five World Cup winners in our squad shows the quality we have, and we can’t wait to get out in front of our amazing fans in Cardiff and put on a show.”

Joe Clarke said, “To be second pick in the Hundred Draft is really quite something. I’m honoured that Welsh Fire have chosen me to join their side. I can’t wait to be at Sophia Gardens this summer giving it our all in front of a packed house. We’ve got the makings of a great side and we want to be up the top of the table.”

Sanjay Patel, MD of The Hundred said, “With a host of star players confirmed, The Hundred will have fans on the edge of their seats with world class sport, as well as bringing more family-friendly entertainment off the pitch. In the women’s competition we have the best players from across the world taking part including Meg Lanning, Beth Mooney and Sophie Devine and we are confident we will set a new benchmark for the women’s domestic game. On the men’s side, it’s great to see a mix of new overseas stars like Kieron Pollard and Andre Russell alongside returning stars such as Quinton de Kock and Sunil Narine. It is also brilliant that some of the best domestic white ball players including Tom Banton and Joe Clarke have been recognised and picked up early. Get your tickets for The Hundred now so you don’t miss out.”

The Hundred proved a big hit with families and young people in particular relishing the mix of fast-paced cricket with music and family entertainment off the pitch which will only be bigger and better this year.

Sophia Gardens will come alive with new activities offering even more fun for all the family and a diverse range of great music acts through the continuing partnership with BBC Music Introducing. Year two of The Hundred will also offer a new range of merchandise to get the family kitted out in full Welsh Fire colours.

Welsh Fire men’s side start their campaign at the Ageas Bowl on Wednesday 3 August in the opening game of the competition against Southern Brave. The side will then host Oval Invincibles at Sophia Gardens on Sunday 7 August.  The women get started the following Saturday (13 August) in a double header against Birmingham Phoenix at Sophia Gardens. The final home game of the competition sees Welsh Fire welcome Northern Superchargers for a double header on Friday 26 August.

Get your seat now so you don’t miss out on the sport and entertainment event of the summer – anyone signed up to www.thehundred.com will be able to snap up their seats from today (5 April) with tickets going on general sale on 20 April.

The Hundred offers an affordable day out for the family, with U16 tickets priced at £5 and free for children aged five and under, and there are family-friendly stands in every ground.

Make sure you don’t miss out – tickets have already been selling fast after last year’s buyers were given first chance to get their seats for this year.